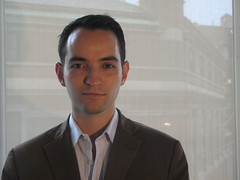 Name, Age, Current Occupation: Vinicius Vacanti, Co-Founder and CEO of Yipit My start-up path: I finished college in 2003 and worked in finance for four years.  During that time, I saved all of my money so I could have a self-funded runway for starting my own company. I start my day at ______ and end my day at ______.I never really start or end. I’m always reading email or thinking about work. I used to live for Fridays. But now I really enjoy what I’m doing so it’s different. I decided to start my own company because: I’ve always wanted to do something entrepreneurial. I really wanted to test myself and be challenged.  When I was working in finance, I felt like I was good at what I was doing, but I had never put myself in a position to fail. After I decided to start my own company, I failed repeatedly. Constant rejection. But it was good. I learned a lot and was being challenged. Which came first – the idea for a product or the decision to start a company: The decision to start a company. Why Yipit? We wanted the name to be 5 letters and end in “it” like “Google it” so it can one day become a verb. As in “Yip it”. My initial idea for the company has (or has not) changed over time: The second version of Yipit was a service where you signed up on the site and received an email with sales, deals and happy hours that were going on in New York. The service was limited to local deals. After the explosion of daily deal sites, we decided it made sense to build an aggregator for all of them. Today we aggregate over 326 deal sites. Whenever you have a market where there’s a lot of something that’s from a lot of different sources, people will want it aggregated. The first thing we did after deciding to start our own company was: We wanted to build the site quickly. From start to finish, we put it out in three days. We hired a woman in Dallas who would manually type in the deals. Our goal was to get traction quickly. My role at the company (CEO) and my co-founder’s role at the company was determined by: My co-founder, Jim, had more of a background in operations. So, he manages the content team, sales and finance functions. I manage a lot of the product management work which made sense because I built the original site and have an engineering background. The biggest challenge of being in a leadership role is: At one point, I was really in the thick of it as product manager and developer. Learning to relinquish the details to others and trusting people was hard but we’ve been able to hire really good people to make it happen. On your blog, your advice for “How to Find Out if Your Idea is Good or Bad”, you recommend not writing a business plan.  Can you expand on that suggestion? We wrote a 70 page business plan. A month in, none of it mattered. For you to write out the next 5 years before you even have traction is impossible. On day one, it’s so unclear what direction the company will go in. Very few entrepreneurs have the winning idea day one. Your first idea doesn’t really matter. Once you get going, your idea will change dramatically. Your ability to adapt the idea to solve the problem is what matters. The best piece of legal advice I ever received was: Putting in place a vesting schedule for founder shares and buttoning that down day one is really important. Otherwise, if one founder walks away for whatever reason, they could walk away with a big percentage of the company. The one legal concept I didn’t understand at the outset was: Vesting. Also there’s a lot of terms that go into the contracts when you’re raising money. It’s tough because as the founder, you’re busy working on the product and raising money at the same time. You need to understand concepts like whether the option pool is created before or after the financing, determining board seats and liquidation preferences. The greatest lesson I’ve learned over the course of my experience as a founder is: People overvalue their initial idea. It’s not about that idea. It’s about your ability to change that idea based on customer feedback. Your goal is to put your idea in front of customers and then understand why it’s bad and fix it. For an entrepreneur looking for funding, my advice is: If you’re pre-traction, you need to try to raise money from people who know you personally. If you don’t have that resource base, then you need traction. You need to put out a prototype and get users signed up. After that investors will find you – even if they have to find you in the bathroom – they will find you. If I had to do it all over again, would I: Yes, but there’s something I would do differently. After I left finance, I would have left and worked at an up and coming start-up to learn how to run a start-up rather than learning those lessons on my own. Right now, the books I’m reading are: Do More Faster. The blogs I’m reading are: Techmeme and Mark Suster’s Both Sides of the Table This post was authored by Nithya Das.